After a tough year at my last job I took 8 months out and worked a dive season in Honduras, going from advanced diver with only 14 dives to Dive Instructor with 200 by the end. I was the happiest I’ve ever been and before I left I promised myself that I would make diving my career.

In the last few months I have sold my car, my house and most of my stuff. I’m just waiting for November-December when the baby will be 5 months old and we’re all out of here.  Er, hopefully I’ll have a job to go to as well. 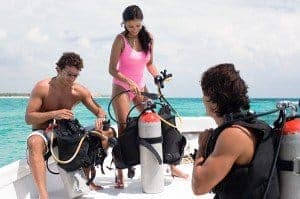 Of course if it was just my Girlfriend and I, I would not be worried about this. We’re pretty experienced backpackers, and usually would just go somewhere and do it. Now we are expecting a baby to be coming with us there’s a lot more to think about. Like malaria, clean bath water and keeping it in diapers. There’s also the matter of general safety and legal permission to even just be there, never mind work!

Living and diving somewhere for years is different from being on holiday there for a few weeks or a month. I have only worked in diving in Honduras and I never had a work permit. I would be grateful for advice from readers about places where you have lived and worked in diving, as well as from anyone who has taken babies travelling.

Here are some things we’ve thought about as being important

I Need Your Help

Right now we are waiting for our child to be born. I’m waiting until October before I start applying for SCUBA instructor jobs.

Now I need your help! I would love advices on places to work as a Dive Instructor that fulfilled my requirements!

If you know the place I’m looking for or you have personal experiences that could help me in my job hunt, please leave a comment below!