The Serengeti is a phenomenal wilderness area. Although best known for the Great Wildebeest Migration, it’s also home to the African Big Five (lion, leopard, elephant, rhinoceros and buffalo).

I’ve visited Serengeti twice and every experience in this diverse landscape and wildlife ecosystem has been a unique time of personal reflection on this beautiful blue planet we call home.

Here, I’ll help you plan your safari, give you a run-down on what animals (predators, herbivores and birds) you’ll see in the Serengeti, and show you where and when it is best to see Serengeti animals,

So, sit back and enjoy hunting with big cats, following the wildebeest across the plains and across crocodile-infested rivers, and checking off those endemic bird species on your list.

Before we dive into Serengeti Animals, it would be a good idea to first orient yourself with our ultra-helpful map of Tanzania above. As you’ll see, the Serengeti is a massive national park measuring 14,763 square kilometres (roughly 5,700 square miles) and located in Northern Tanzania near the Kenyan border.

Get a quote from our recommended local safari operator

Get a safari quote

Big Cats and Other Predators in the Serengeti

The Serengeti National Park is rated as one of the best places to see big cats in the wild. Lions, leopards and cheetahs are some of the most sought after animals on a safari in Africa. Their elusive nature, sometimes playful antics and often deadly hunting skills are the crown jewel of any expedition.

Although predatory cats can be found across most of the Serengeti area, the Seronera River Valley in the south-central part of the park is one of the most popular areas to see all three big cat species, sometimes in a day! Sightings are year-round but peak over the Calving Season in late January to March when the rainy season begins.

A male lion can weigh around 200kg (440lbs) and with paws the size of a side plate, they earn the title king of beasts! With such a high concentration of prey species, the Serengeti National Park has one of the biggest populations of lions in Africa. Out of over 8,000 lions in Tanzania, around 3,000 are in the park alone. The sheer number of these felines combined with the fact that they live in larger prides due to an abundance of food, means very good chances for lion sightings on a Serengeti trip. 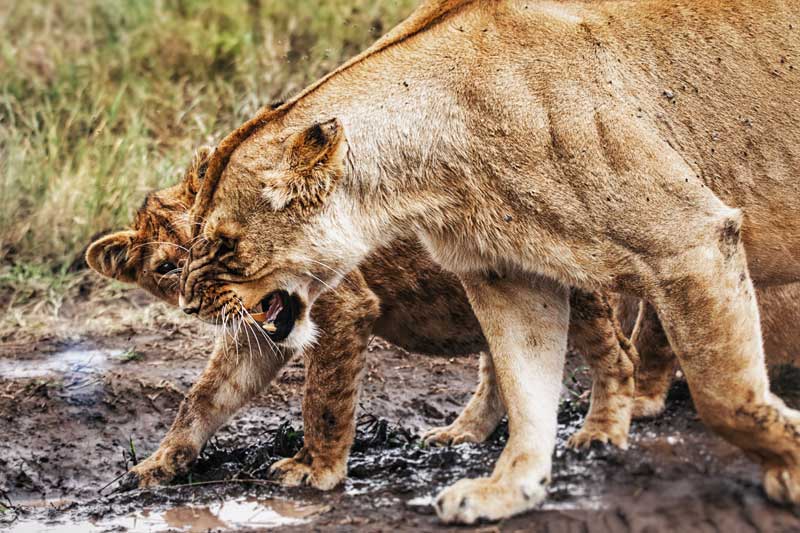 A leopard’s ‘spots’ are actually rings of small blotches with darker spotty centres called rosettes. Leopards can haul prey 3 times their body weight up a tree to keep it away from other predators. Camera trap studies across the Serengeti National Park show that there are around 5.5 leopards for every 100 sq km (10,000 ha). You are more likely to see them during the wet season – November till May – as this is when there is more prey and less and lions to compete with. Areas with trees along watercourses and granite outcrops, including the Seronera Valley in central Serengeti and the Lobo area of the northern Serengeti, are good areas to spot these elusive cats. 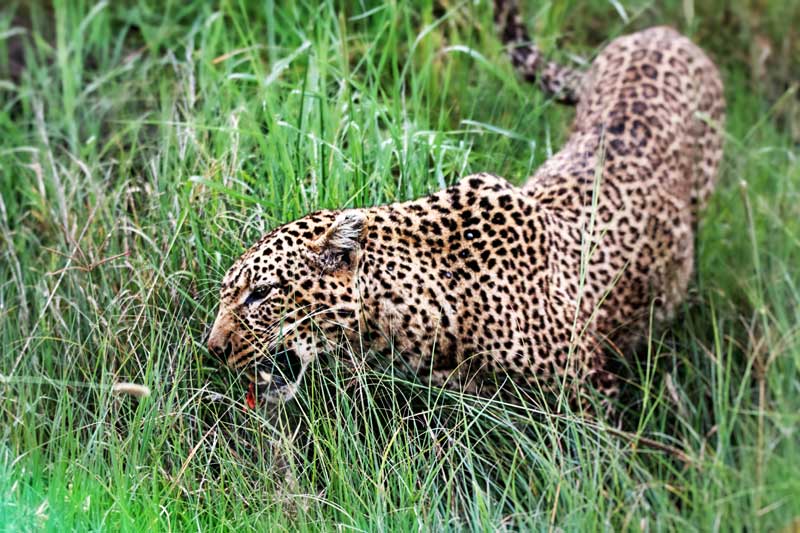 Cheetahs do not fully retract their claws as they need them for traction when they hit top speeds of up to 110kph (70mph), just like cleats on a soccer boot. The Serengeti plains in the south of the park are prime cheetah habitat. The grassy plains are ideal open hunting grounds for these cats to reach full speed, which is up to 130 km/h! Shady trees and rocky outcrops make perfect vantage points for spotting prey. 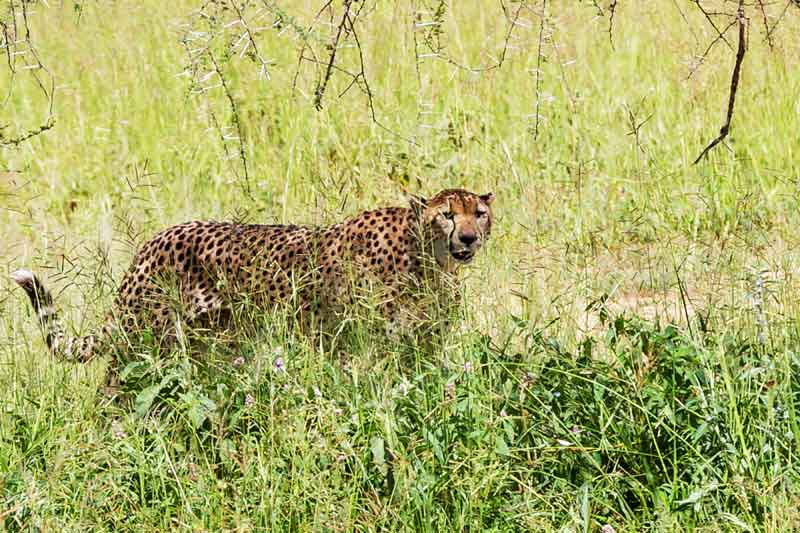 Spotted hyenas: Although hyenas have a reputation for scavenging, they are effective hunters and kill over 50% of their prey themselves. Hyenas are common throughout the park and follow the migrating herds. 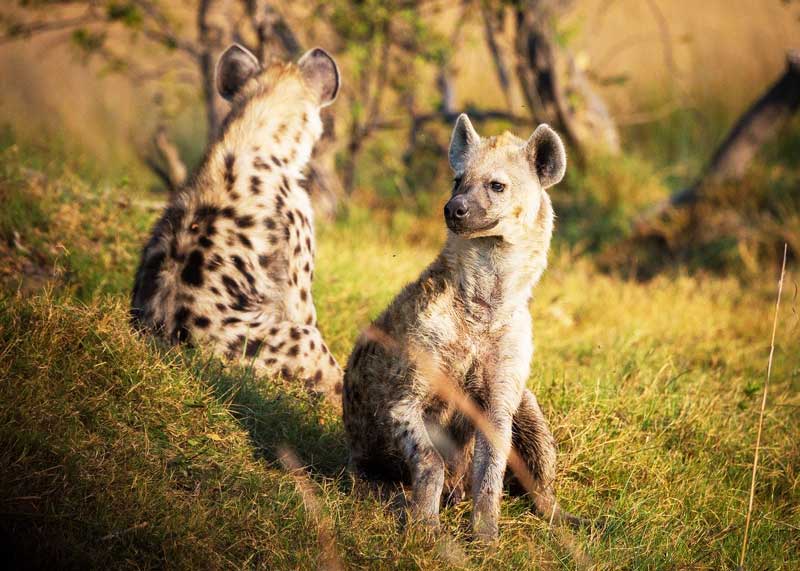 Wild Dogs are exceptionally rare to see the best place to see them is Ruaha National Park which is home to the third-largest population in the world. There are also populations in Selous Game Reserve and in the grasslands of the Ngorongoro Conservation Area. 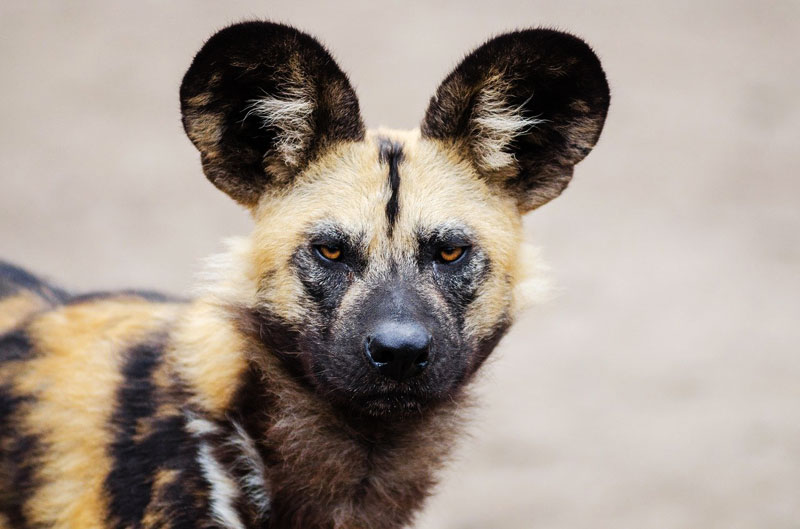 Some of the more elusive meat-eating species found in the park include striped hyena, caracal, jackal, servals, honey badgers, mongoose and even an otter if you are lucky! Some of these species are only active late afternoon or after dark. Opt-in for night safaris to give yourself the best chance of sighting these nocturnal creatures.

Herbivores of the Serengeti

The best time to visit the Serengeti to view the plains animals is typically the dry season (June till October), as these animals gather at waterholes. 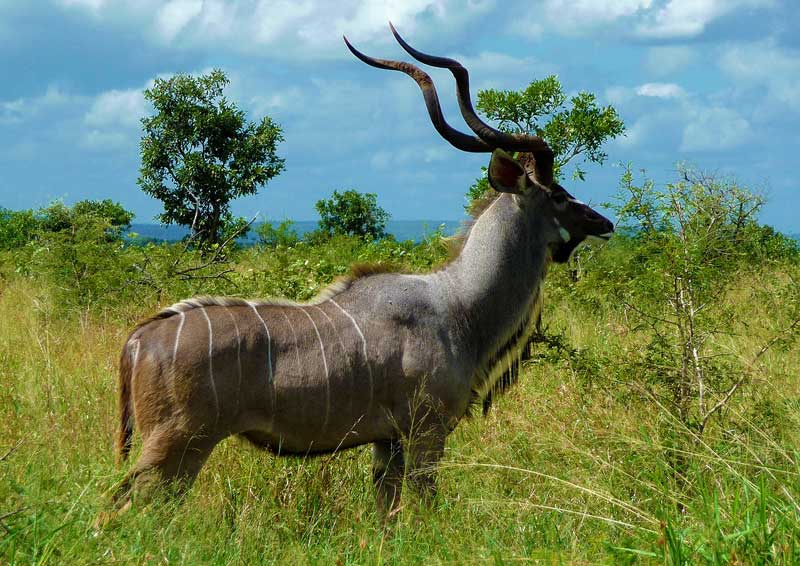 The Great Wildebeest Migration is the picture most travellers have in mind when booking a trip to the Serengeti.

The migrating herds of not only wildebeest but also zebra, gazelle and eland, move from the South of Tanzania’s Serengeti up north towards the lower part of the Masai Mara in Kenya and then back in a clockwise direction. 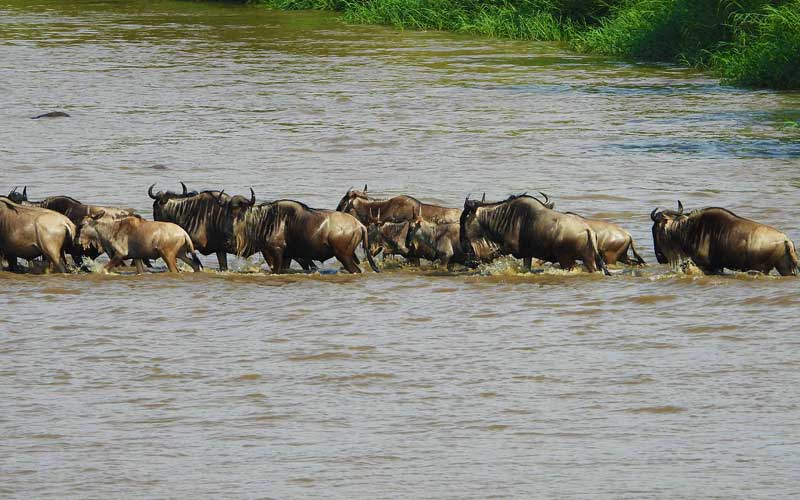 Check out this awesome Serengeti safari tour during calving season from our recommended local partner.

Read more on how to choose between a Tanzania or Kenya safari for your next and greatest adventure.

The movement of the herds is a year-round event and so when you plan your visit depends strongly on what you wish to see. Whether it’s competition between males, calves frolicking beside their mothers or the thrill of the river crossing as wildebeest and zebra dodge the jaws of hungry crocodiles, the table below can help you decide when and what area is best to visit.

Following The Wildebeest Migration in the Serengeti

Moving herds spread out across a wide area

Moving south to the Southern Serengeti 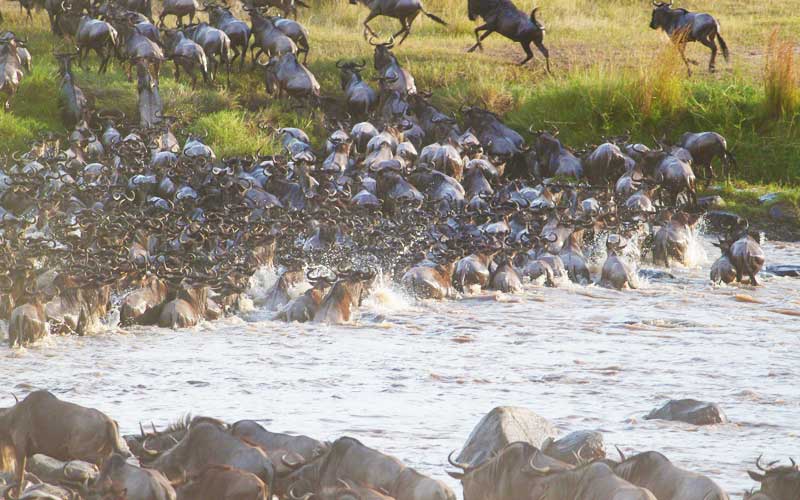 Not all grazing and browsing animals migrate across the Serengeti Plains, some are residents that can be seen year-round. Below is a Serengeti animals’ list of some of the other plains’ animals found here. 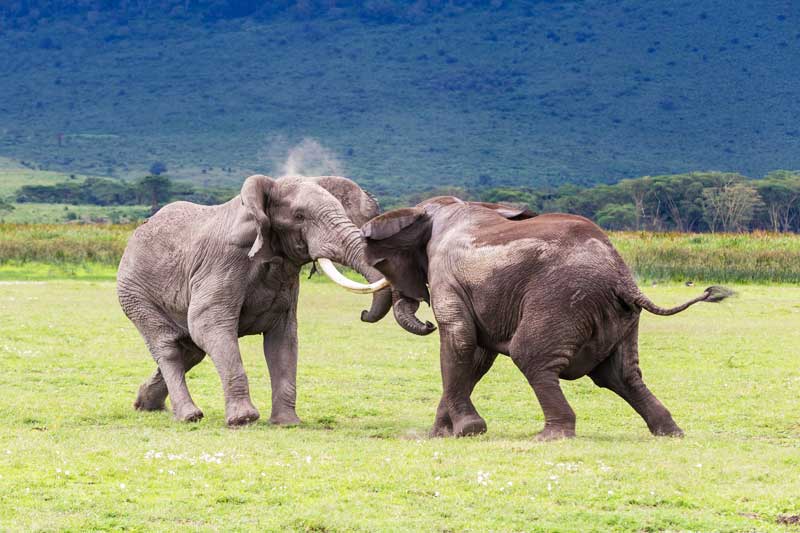 Elephants can be seen throughout the year, but it’s easier to encounter them in the dry season (June- October). This is when they gather at waterholes, often close to accommodation inside the Serengeti National Park like the Four Seasons Safari Lodge.

Black Rhinoceros are extremely rare with a recovering population of around 160 thanks to major conservation efforts (read more from the African Biodiversity Collaborative Group). 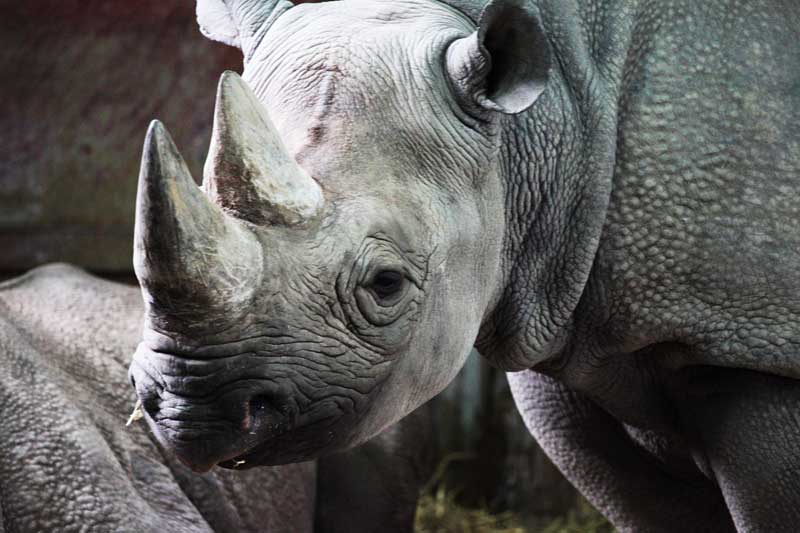 Although it would still take some luck, the best chance of seeing a black rhino is around the Moru kopjes and in the north of the park, they are also found in the Ngorongoro Crater.

Buffalos are Serengeti residents year-round, typically close to water sources. But the largest herds are in the Ngorongoro Crater, where there is a lot of tall fibrous grass. 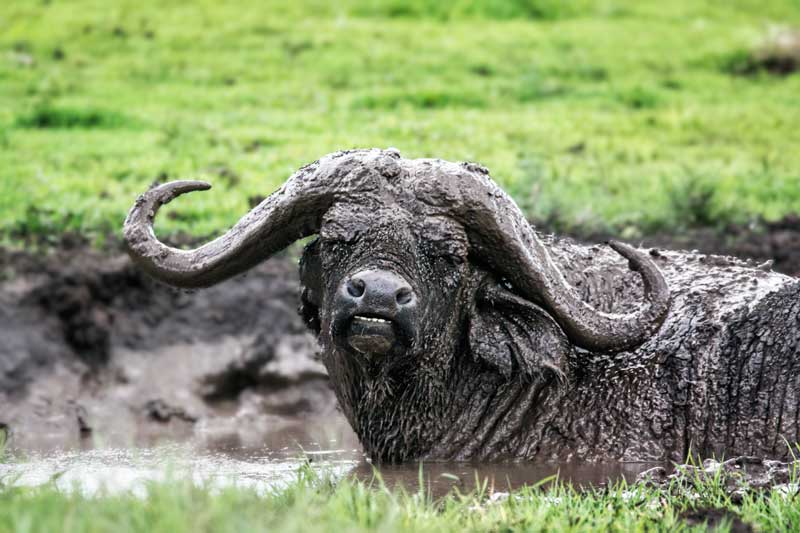 Hippos are found in numerous permanent water sources. The Retina Hippo Pool in the central Serengeti is home to hundreds of these animals. 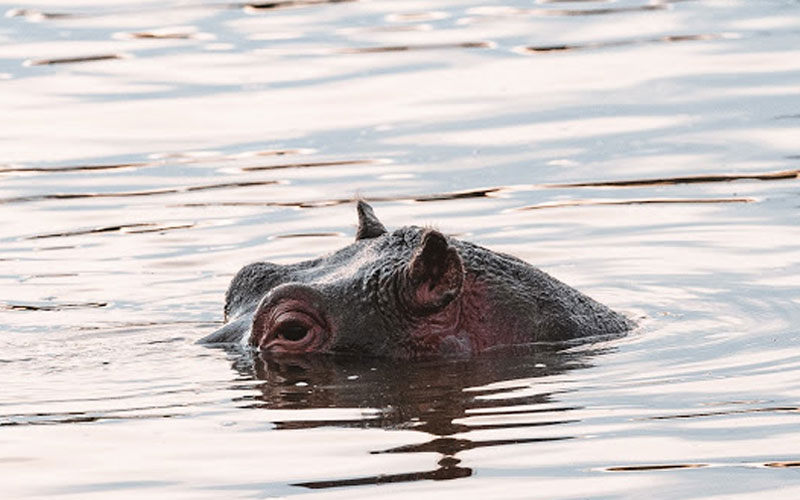 The largest giraffe species, the Masai Giraffe, is a common resident in the Serengeti and roams in large herds.

There are multiple species of antelope, including impala, eland, topi, hartebeest and Grant’s gazelle easily seen on the grassy plains year-round.

Native Birds of the Serengeti

Endemic birds are those special species that only occur in a particular place. Three truly endemic birds can be found in the Serengeti: 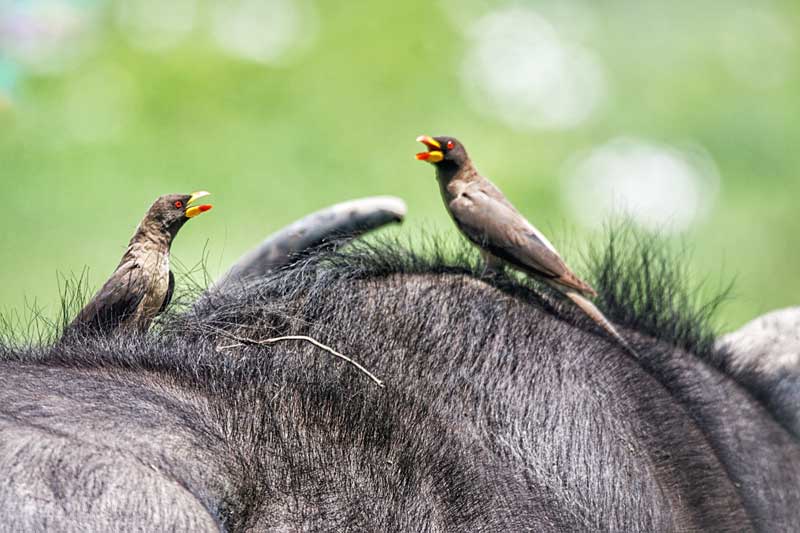 Bird Habitats in the Serengeti

Besides the endemics, you can look out for the following interesting species in the different Serengeti habitats:

In the open savanna and grassland, you might spot a Usambiro barbet or charismatic lilac-breasted roller, often perched in a tree beside the road. Fischer’s lovebirds are a fairly common, near-endemic species often seen in clusters of trees.

In more heavily treed areas such as forests, dense woodlands and riparian areas, look out for small flocks of grey crested helmet shrikes and Schalow’s turaco.

Wetlands, lakes and rivers are ideal birdwatching sites and home to a host of species of ducks, egrets, spoonbills, herons, ibises, flamingoes, African jacanas and the marabou and saddle-billed stork to name a few.

Keep an eye out in the sky above and on high perches for predator birds like the Verreaux’s eagles, fish eagles, bateleurs, augur buzzards, pale chanting goshawks, kites and vultures.

Migratory Birds of the Serengeti

Below are two kinds of migratory birds you can find making seasonal homes in the Serengeti:

Several species of birds breed in Europe or Asia and then make the long journey – up to 10,000 km – to the African Serengeti to wait out the cold winter. Some that can be seen in the Serengeti are listed below with their preferred habitat:

These are species that follow the rains into the Serengeti from other parts of Africa and include:

There are over 500 different bird species in the Serengeti and half of those can be found in the Ndotu Area. Birding is good all year round but really peaks from November to May (wet season) when many local species are nesting. This also coincides with the arrival of migratory species from within Africa, Europe and Asia.

For a full checklist of birds of the Serengeti National Park, check out this list. 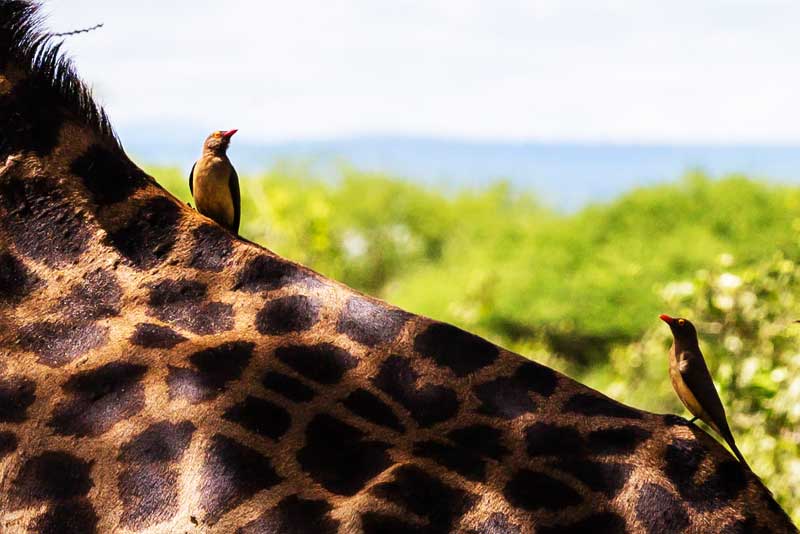 I hope you found this article on Serengeti animals helpful! Set your next trip destination for the illustrious Serengeti plains so you can see these marvellous creatures up close.

Better safe than sorry… I highly recommend travel insurance for Tanzania. Use the quote calculator from our partner, World Nomads. World Nomads provide comprehensive travel cover as well as specific coverage for hiking up to 6000m, which is perfect for Kilimanjaro.