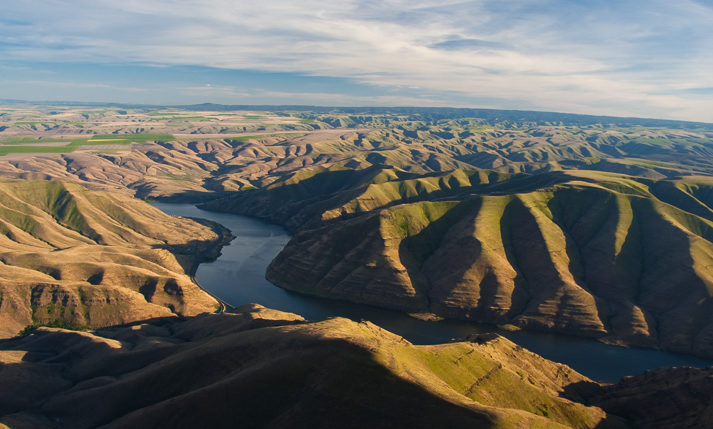 Our Vision for the Snake River

Read more about how we propose to come together around solutions for the challenges facing the Pacific Northwest and the Snake River.

The Snake River originates in Wyoming and arcs across southern Idaho before turning north along the Idaho-Oregon border. The river then enters Washington and flows west to the Columbia River.

It is the Columbia’s largest tributary, an important source of irrigation water for potatoes, sugar beets, and other crops. It also supports a vibrant recreation industry. A rare salmon fishing season in 2001 generated $90 million in economic impacts in Idaho, an amount that would more than double if wild salmon and steelhead are restored to the population levels of the 1950s.

The Snake River basin once produced about half of all spring chinook salmon returning to Columbia basin rivers. More than two million wild salmon and steelhead once returned to spawn in the Snake and its tributaries each year.

Today, these species are either extinct or threatened with extinction, as the most extensive freshwater salmon habitat in the lower 48 states is upstream of the four dams on the lower Snake.

Snake River salmon and steelhead begin their life’s journey high in the mountains of central Idaho, northeast Oregon, and southeast Washington.  They then head out to sea, and after several years return to their natal rivers to spawn, an inland journey of more than 900 miles.  The fish returning to the headwaters of Idaho’s Salmon River spawn at higher elevations than any other salmon and steelhead in the world.

Four U.S. Army Corps of Engineers dams and 140 miles of slack water reservoirs prevent salmon from migrating to and from the high-elevation spawning and rearing habitat in central Idaho, northeast Oregon, and southwest Washington.

The system of dams and reservoirs kills 50 to 80 percent of juvenile salmon and steelhead as the fish make their way downstream to the ocean. Climate change is already affecting runoff patterns in the Columbia basin, causing mountain snow to melt earlier in the spring, which leads to lower summertime flows and higher summer water temperatures.

If the dams remain in place, global warming could push the Snake River’s remaining wild salmon runs to extinction. A free-flowing river, on the other hand, would allow salmon and steelhead quicker, safer access to high elevation habitat that is expected to remain hospitable for these fish even with substantial warming.

The best available science concludes that removing these outdated dams and restoring a free-flowing lower Snake River would allow for the restoration of healthy, fishable salmon and steelhead runs to the largest potential block of healthy salmon habitat remaining in the lower 48 states.

The Salmon River’s high elevation habitat is likely to continue to be productive even in the face of climate change, but only if impacts of the four lower Snake dams – which heat up and slow down the river and provide refuge for predator fish that eat young salmon – are significantly reduced.

Before removing the four lower Snake River dams, the services they provide must be replaced with cost effective alternatives.

The economic benefits of restoring the lower Snake River and its salmon and steelhead have been estimated in the hundreds of millions thanks to the income it would generate for commercial fishing up and down the Pacific Coast, increased recreational fishing from Astoria, OR to Stanley, ID, and new boating, camping, hiking, and hunting opportunities along the scenic lower Snake River.

Dam removal would also eliminate a growing flood risk in the town of Lewiston, Idaho, where sediment is piling up behind Lower Granite Dam, the uppermost of the four lower Snake River dams. If Lower Granite is not removed, Lewiston’s levees, along with the city’s railroad and highway bridges, will have to be raised substantially to protect the community from the ever-rising river. Raising the levees could cost taxpayers up to $87 million and would further wall the city off from its riverfront.

The benefits these dams now provide can be replaced by other means, while still allowing the Northwest to have affordable, carbon-free energy. The dams produce the least amount of energy when it’s needed the most: during the cold of winter and heat of summer when river flows are low. The energy from the dams can be replaced through a combination of cost-effective energy efficiency, wind power, and other clean energy sources.

The freight transportation benefits of the dams are also replaceable. Currently, a significant proportion of Northwest wheat farmers rely on Snake River barges to get their grain to market. Dam removal will require targeted upgrades to southeastern Washington’s rail, highway, and Columbia River barge systems. Only one of the four dams provides irrigation water, a small amouth that could continue to be accessed by extending pumps into the free-flowing river. Dam removal would also likely be cheaper in the long run for taxpayers and electricity ratepayers, as it would reduce mitigation costs for the rest of the Columbia River dams.

American Rivers is ready to evaluate and even embrace an alternative plan that achieves recovery of harvestable salmon and steelhead runs, but none has come to light so far, which is why we have found ourselves engaged in long running litigation. As other river and water management settlements around the West have demonstrated, it takes hard work to chart out a win-win solution, but such outcomes can be and have been achieved.

In the Columbia-Snake basin, a win-win solution will be one that restores abundant, harvestable wild salmon, fosters investment in new renewable energy, ensures sufficient water supplies and transportation infrastructure for farms and communities, and reduces risk of flood damage.  Reaching this outcome will require strong leadership from the White House, Northwest governors, and the Northwest congressional delegation.  These leaders should encourage and even demand that Columbia Basin stakeholders get together to forge a comprehensive plan to restore imperiled salmon and protect and enhance their region’s economy and quality of life.